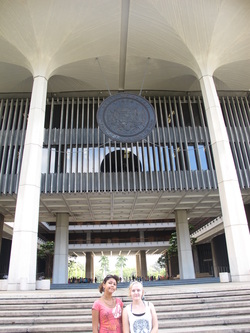 Students in Hui Malama have been working for a few years, passing the torch as students graduate out of our program, on raising awareness of the critically endangered Hawaiian False Killer whale population.  We first became aware of this magnificent, relatively unknown, marine mammal when Robin Baird of Cascadia Research came to make a presentation years ago.  Since then, the kids have been chipping away at the monumental task of getting the word out about yet another creature struggling to survive.

Hawaiian False Killer whales are similar to other False Killer whales around the world, except they are the only population known to stay in one area rather than cruise the oceans.  They compete for the same fish people like, yet they have been documented sharing their catch with each other and with fishermen...sometimes even tossing a fish on a boat!  Learn more about them by visiting the links in the section below the Hakalau section.

Our work continues to raise awareness as the students attempt to partner with elected officials in drafting and passing legislation.  Two dedicated Junior Ocean Scientists, Aurora and Shama, raised the money to travel to O'ahu to learn more about the legislative process.  They will come back as student leaders next year in our continuing project to help the Hawaiian False Killer whales.  Next year, our project will focus on learning about the government, environmental stewardship, and how the public can make a change. 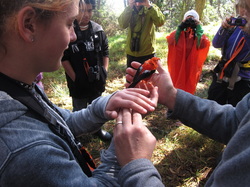 A self-selected group of students traveled up the mountain to Hakalau Forest.  We met with Uncle Scott and Auntie Kainana from the education program at Hakalau Forest NWR, and Refuge Biologist Steve Kendall (among others) kindly shared his mana'o with us.  We learned so much!  We got to plant native plants, learn about phenology, listen to birds, and hike out to see mist nets in action.  Staying overnight in the cabins and working together as a team made it all that much more special.  Thank you, UH-Manoa Professor Creighton Litton, for getting this excellent program started! 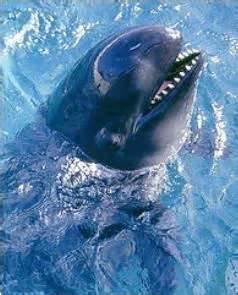 Our Junior Ocean Scientists have been working for over three years to help raise awareness of this amazing, rare creature.  Learn more about them through the following link:
http://www.cascadiaresearch.org/hawaii/falsekillerwhale.htm