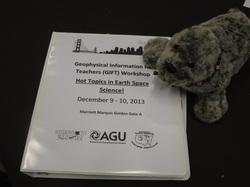 This will be the third year Randi and Hui have attended the AGU Fall Meeting.  This trip included helping out at the JOIDES Resolution booth at Exploration Station (a family science event), participating in a two-day workshop for teachers called Geophysical Information for Teachers (GIFT), attending a variety of oral presentations, and being interviewed and filmed for an upcoming JOIDES Resolution video.  The annual conference continues to be a wonderful way to learn about cutting edge science, network with other educators and scientists, and continue education outreach projects.

Hui, Malama's sister, is on a science research vessel...
the giant Joides Resolution! 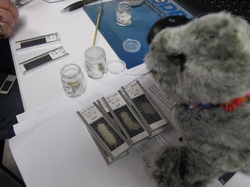 Hui has been doing so much science!  She and Randi are aboard the Joides Resolution, a giant research vessel dedicated to science.  Stay tuned for more about everything they're doing while they participate in the School of Rock, sponsored by Deep Earth Academy.

Malama the Monk Seal is an adventurer, environmental activist, and dedicated Hui Malama member.  Malama is always off on adventures.  Learn more about what Malama is doing by checking in regularly on this page.

Malama went to Hakalau Forest for an Overnight Field Trip 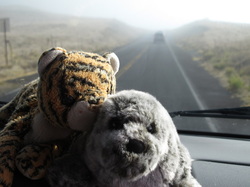 Malama got to go along on our Hakalau overnight field trip.  He helped collect data on birds, learned about phenology, and made a new friend, Tiny. To find out more about the trip, go to our Environmental Projects 2012-13 page.

Our ambassador, Honu, and his friend, Tomo, send first picture from Japan! 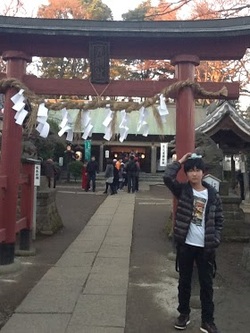 Tomo and Honu (sitting on Tomo's head) visited this Japanese temple and sent us a photo.  How exciting to hear from them!  We look forward to more photos of fun adventures :) 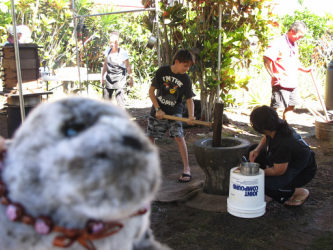 Malama spent a restful winter break just kicking back and recharging his batteries so he can dive right in to second semester.  He did go on one adventure over the break:  he went to Wailea to experience mochi pounding and taiko drumming.  What a treat to see a Lion Dog dance, too!

Malama has gone with Randi to the American Geophysical Union Fall Meeting in San Francisco (http://fallmeeting.agu.org/2012/).  This
conference is full of earth scientists who are presenting the results of their work over the past year.  Together, Malama and Randi will attend sessions presented by research scientists from around the world.  They will also help present a session on interactive video in the classroom, and they will host a poster session.  Of course, they will also network like crazy with lots of scientists, educators, media people, and professors.